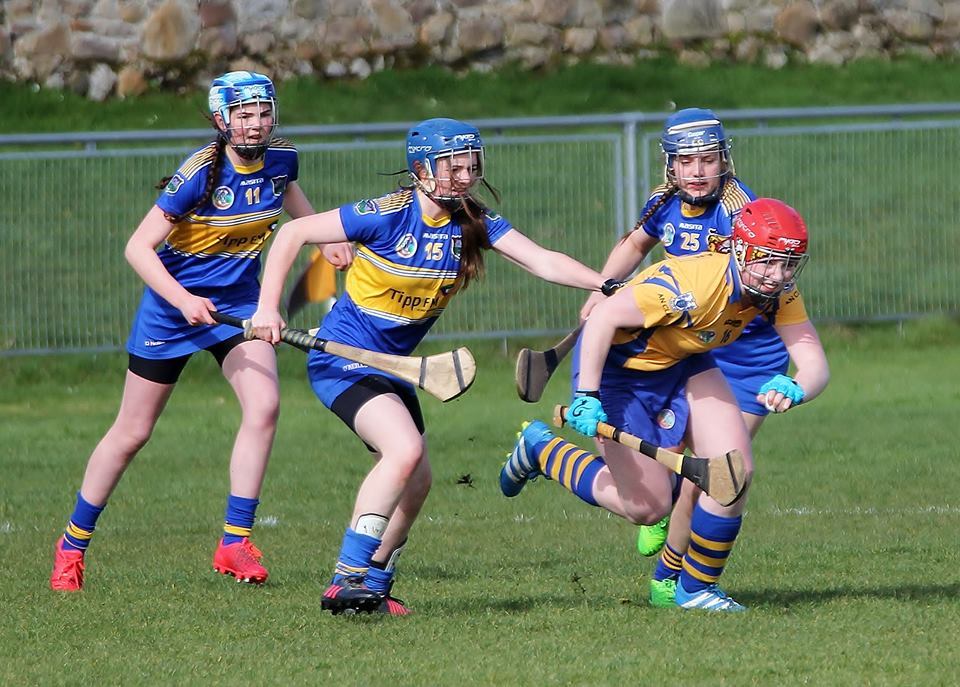 Clare took on Tipperary in Clonlara G.A.A grounds on Sunday last in the Munster U-16 ‘A’ Championship semi-final but came up just short on the day. Tipperarys trio of goals ensured victory went the way of the Premier County, despite Clare having the brighter start.

Robin Conway opened the scoring with a point from a free on the fourth minute and scored a second point not even a minute later from another free thirty metres out. The Clare forwards were now playing fast, one-touch camogie which caused problems for the Tipperary full back line.

Clare’s third point came from a brilliant move starting in the midfield when Becky Foley released Ciara Halpin who ran at the Tipp full back line, where she flicked the sliotar to Aoibhinn Ryan. Ryan in turn flicked to Conway and the Feakle forward scored her third point and Clare’s first from play on the eight minute.

Soon afterwards Lorna McNamara found Conway who shot goal-wards, only for her effort to come off the crossbar. It wasn’t long before the Feakle forward struck again, raising the white flag for her and Clare’s fourth point.

Tipperary started to settle and in the thirteenth minute, scored their first point Laura Shinnors striking over the bar from an acute angle. Clare responded with one of their own, Conway on target again. Tipp won the battle for the puckout and moving play forward Rachel O’Dwyer passed to the waiting Roseanne O’Donnell who faced with the oncoming Rachel Daly opted to bat the sliotar deceiving Daly and earning a green flag for her efforts. Again Robin Conway replied with a point to keep the home side ahead by two points. Now the Tipperary forwards started to move and added a point from Gill Ann Quirke. Again Tipp responded well to the puckout and following good work rate, it was O’Dwyer who raised the green flag following her handpass to the net before striking a second goal just before the break to leave a score of 0-6 to 2-2.

The second half was a low scoring affair, with just a score apiece for each side, crucially Tipps score was a green flag within a minute of the restart. Half time substitute, Karin Blair, catching the breaking ball and racing through to finish with her sides third goal. This would be Tipperary’s last score of the match as Róisín Minogue and the Daly sisters began to dominate the backs. Clare valiantly attacked the Tipperary backs but the visitors’ defence stood firm and repelled what Clare could throw at them. Clare’s next and last score came when Conway drove straight through for goal and was brought down on the 21 metre line, which the Feakle forward converted. In a very physical second half, both sets of defences stood firm and with a strong cross field wind scores were hard to come by, with Tipperary taking the win 3-3 to 0-7.