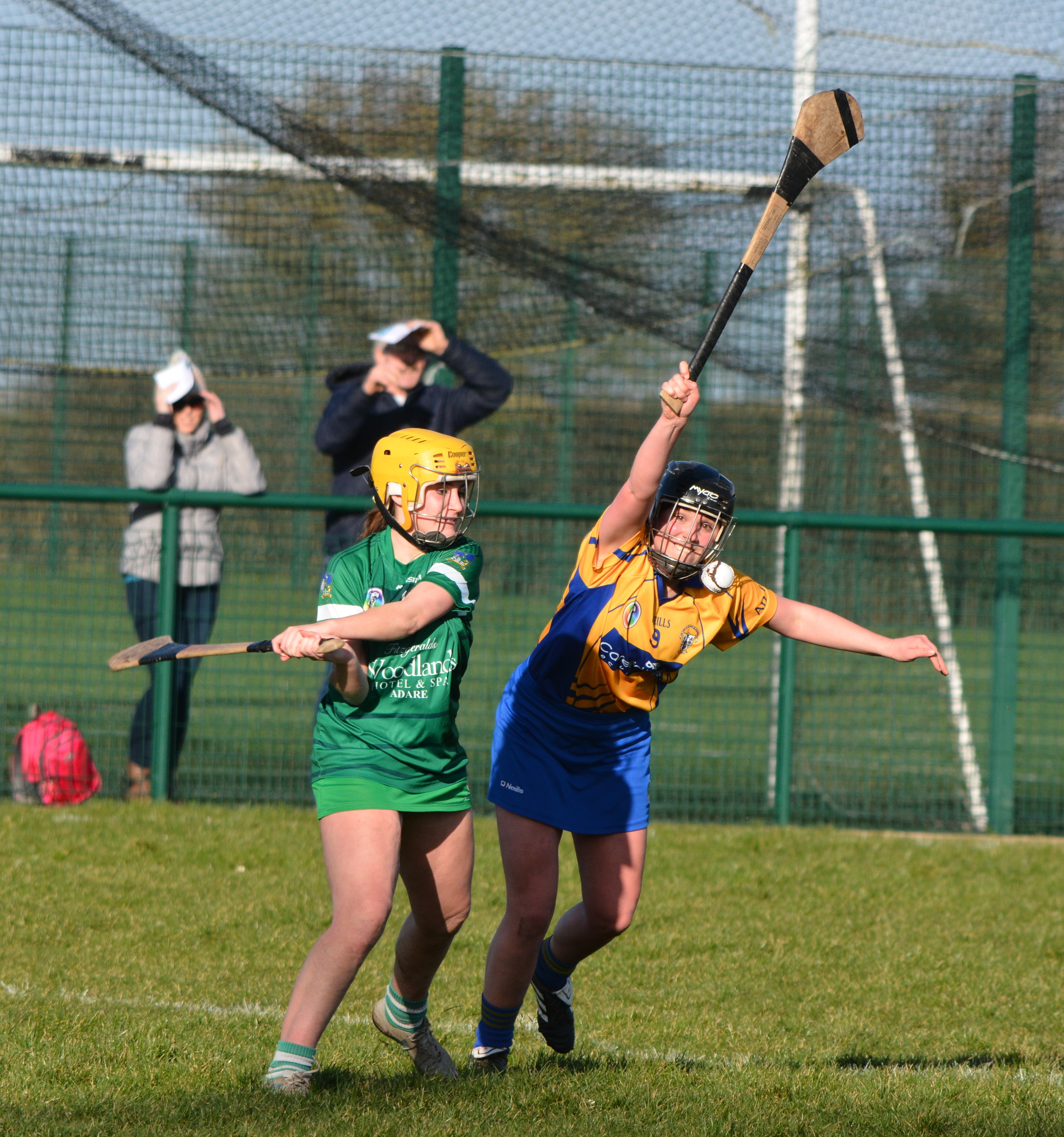 3 of the Littlewoods Ireland Div 1 Camogie League on Sunday afternoon in Mick Neville Park Rathkeale. A physical contest throughout, played in dry sunny conditions, with the outcome ensuring that Clare are in a good position heading into their last two games.

Clare were out of the traps from the get go, and totally dominated proceedings in the opening ten minutes, driving forward at every opportunity and  piling pressure on Limerick. A foul on Orlaith Duggan saw Chloe Morey split the posts for the opening score of the game, and with Andrea O’Keeffe winning the puckout before passing to Orla Devitt who also raised a white flag, Clare had two points on the board with five minutes on the clock.  Devitt added again from play within a couple of minutes. Niamh Mulcahy opened the Shannonsiders tally on the eleventh minute when she converted from placed ball. Mulcahy added from play and then from placed ball to have the sides level mid way through the opening half.  Her next effort from placed ball put the home side ahead for the first and only time in the game. However this lead was shortlived, a foul on Morey out on the wing saw the Sixmilebridge reply by striking between the posts to level the sides on the twenty fourth minute. Mulcahy dropped her next attempt from a free at the edge of the square , however Roisin McMahon and Máire McGrath combined well together to win back possession and clear from danger. An Eimear Kelly free on Clares own half back line was sent down the wing with Regan Conway making a timely catch, before turning her marker and having made space shoot towards goal. Laura O’Neill in the Limerick goals went high to block the shot whose trajectory was taking it over the bar, only for O’Neill to fumble the ball and spill it over the line for the only goal of the game, and also putting Clare back in front just before the half time whistle, Clare 1-4 Limerick 0-4.

The games chief scorers, Morey and Mulcahy, exchanged points at the restart to keep the goal the difference between the sides. Andrea O’Keeffe and Caoimhe Lyons then traded scores to keep the score at Clare 1-6 Limerick 0-6 with just five minutes played in the second half. The next ten minutes saw both sides match each other in intensity, with both sides missing opportunities to extend their tally on the scoreboard. Mulcahy came closes to a green falg for Limerick when mid way through the second half she fired towards goal only for Lauran Solon to block well, and with McGrath on hand to assist in clearing to the wing the moment of danger had passed, however with Clare fouling in possession, Mulcahy shortened Clares lead when she converted the resulting free. Two minutes later Mulcahy further reduced Clares lead, again converting from placed ball. With ten minutes to play Mulcahy had the opportunity to level the game, but her shot was just wide of the mark. At the other end, Morey extended Clares lead to two points when she converted a free. The last few minutes were played out at a frantic pace, as Limerick fought to try and win possession and move play towards the Clare goals in a bid for a green flag. Clare maintained their composure under attack, and won back possession, sending play back down the field, with Begley making the catch. A foul on Begley afforded Morey the opportunity to extend Clares lead to three points with two minutes of time remaining. Limerick had one last opportunity in injury time, and it was substitute Cliona Lane who split the posts from play, to leave Clare ahead by two points as referee Liz Dempsey sounded the final whistle with the Banner girls taking the win, Clare 1-8 Limerick 0-9, and more importantly a vital three points on the leaderboard.

Dublin recorded a 0-15 to 0-10 win over Meath, while Kilkenny saw off the challenge of Waterford 1-14 to 0-8. Next weekend will see some of the Clare panel take to the field for their respective colleges in the Ashbourne Finals weekend, before Meath make the journey to Clare on the 18th February.

PLEASE NOTE VENUE CHANGES FOR BOTH U16 MATCHESSat 22nd O...

CHANGE OF VENUE FOR UNDER 16s

U 16 A replay Newmarket on Fergus v Inagh-KilnamonaIs no...

It’s with deep shock and a heavy, heavy heart that we, C...

Results - Adult and u13 Championship Finals