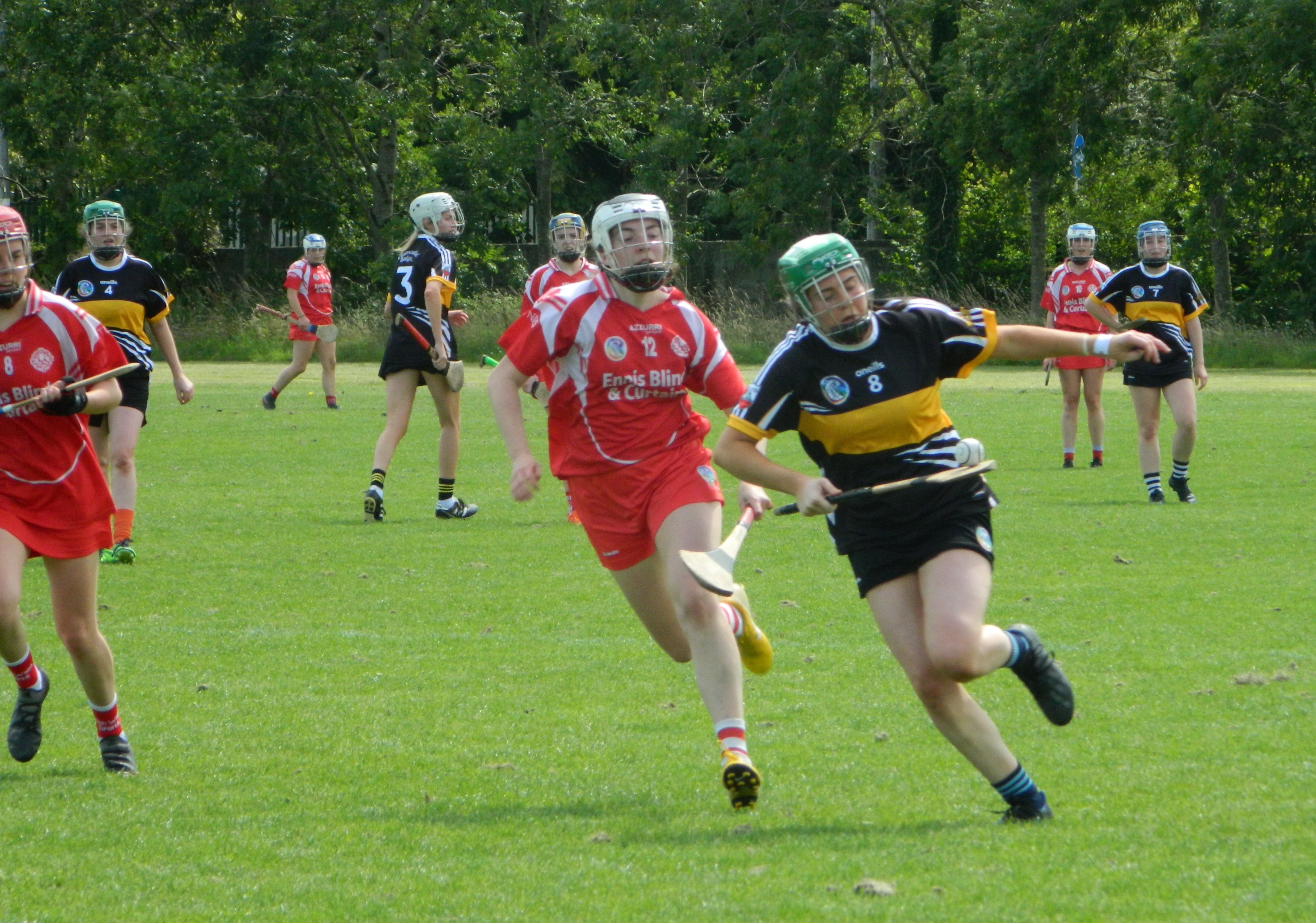 Following an enforced hiatus of exactly 19 weeks since there was any Adult Camogie activity in Clare, it fell to Eire Og and Clarecastle/Ballyea to re-start the game and they did so in style at Eire Og on Sunday afternoon. With a plethora of guidelines and rules for the officials of both Clubs to attend to, the players from both sides concentrated on what they do best and did so in serving up an exciting game, in front of a much-reduced number of supporters due to crowd restrictions.

It was the hosts that came out on top in this first round of the Intermediate Championship, played in glorious sunshine. In a tight first half, the opening score came from Éire Ógs Grainne Nolan, followed by a second point from Orla Devitt. Clarecastle/Ballyea hit back with three pointed frees and one from play from Doireann Murphy, followed by a further point from Amie Wiley. The Townies worked well to add a further four points to their tally, giving them a slender one-point lead in the first quarter. In the 25th minute, Clarecastle/Ballyea raised the first green flag of the day as Hannah Mai Neylon struck for goal, putting her side two points up. Éire Óg rallied and two points from placed balls from Grainne Nolan, punctuated by a point from the visitors reduced the margin to the minimum. An Orla Devitt levelled matters just before the half time whistle, leaving the half time score at Éire Óg 0-09 to Clarecastle Ballyeas 1-06.

Clarecastle/Ballyea opened the second half with a pointed free from Doireann Murphy. However, the Townies quickly responded in the 35th minute with a goal from Elizabeth Russell putting them ahead by two points. Éire Óg were determined to defend their lead and added a further four points to the scoreboard while Clarecastle/Ballyea battled hard throughout the final quarter with excellent defensive work from Ciara O'Dell, Carol Browne and Aoibhin Donnelly. Clarecastle/Ballyea notched up a further two points from placed balls, but it was the Townies that took the points from this local derby on a full time scoreline of 1-13 to 1-09.

Clooney/Quin ran out easy winners in the warm sunshine in the end on Sunday in the first round of the Intermediate Championship against Whitegate. The result was never in question, with Clooney using their senior experience to finish out the game on a score line of 1-23 to 2-4. It was Clooney/Quin who were first out of the traps and got the opening score of the game from play by Emily Costello in just two minutes. Within the next few minutes Clooney/Quin added a brace of points from play to their tally from Deirdre Murphy and Costello. A quick puckout from the Whitegate goalkeeper Lauran Solan made its way to Lisa Donoghue who was fouled by Clooney/Quin. Greta Hickey stepped up to take the free and it found its way to the back of the Clooney/Quin net. This levelled up the scores. Clooney/Quin continued to build on their scoring chances after this and scored a number of points, many coming from frees. Whitegate managed one further point from play from Greta Hickey before the half time whistle. Half time score Clooney/Quin 0-9, Whitegate 1-01.

Substitutes for both teams at half time had a substantial impact on the play, with Clooney/Quin's Aoibheann Duggan and Whitegate's Amber Nolan doing very well for their respective sides.  However, Clooney/Quin continued to dominate the match and contributed a further 1-14 to their score sheet. Whitegate continued to soldier on and did not give up until the final whistle. The East Clare outfit added a further 1-4 to their score in the second half with a goal coming from Triona Kelly. Greta Hickey added two points from frees and her sister Aideen added a point from a free. Amber Nolan scored a point from play after Aideen Hickey delivered a great pass. Clooney/Quin came out the winners in the end with a 16-point margin. Solid in defence for the home team were Ciara Grogan and Nicole O'Riordan, while last year's county Senior Captain Orlaith Duggan was outstanding at mid field. Experienced players Deirdre Murphy and Mary Clune were very steady in the full forward line up for Clooney/Quin.

Feakle Killanena got their championship campaign off to a winning start with a comprehensive victory over near neighbours Tulla. A dominant first half performance laid the foundation for this victory. Credit to Tulla whose never say die attitude saw them finish with a strong second half performance.  Unfortunately, it wasn't enough to dent the comprehensive Feakle Killanena lead.