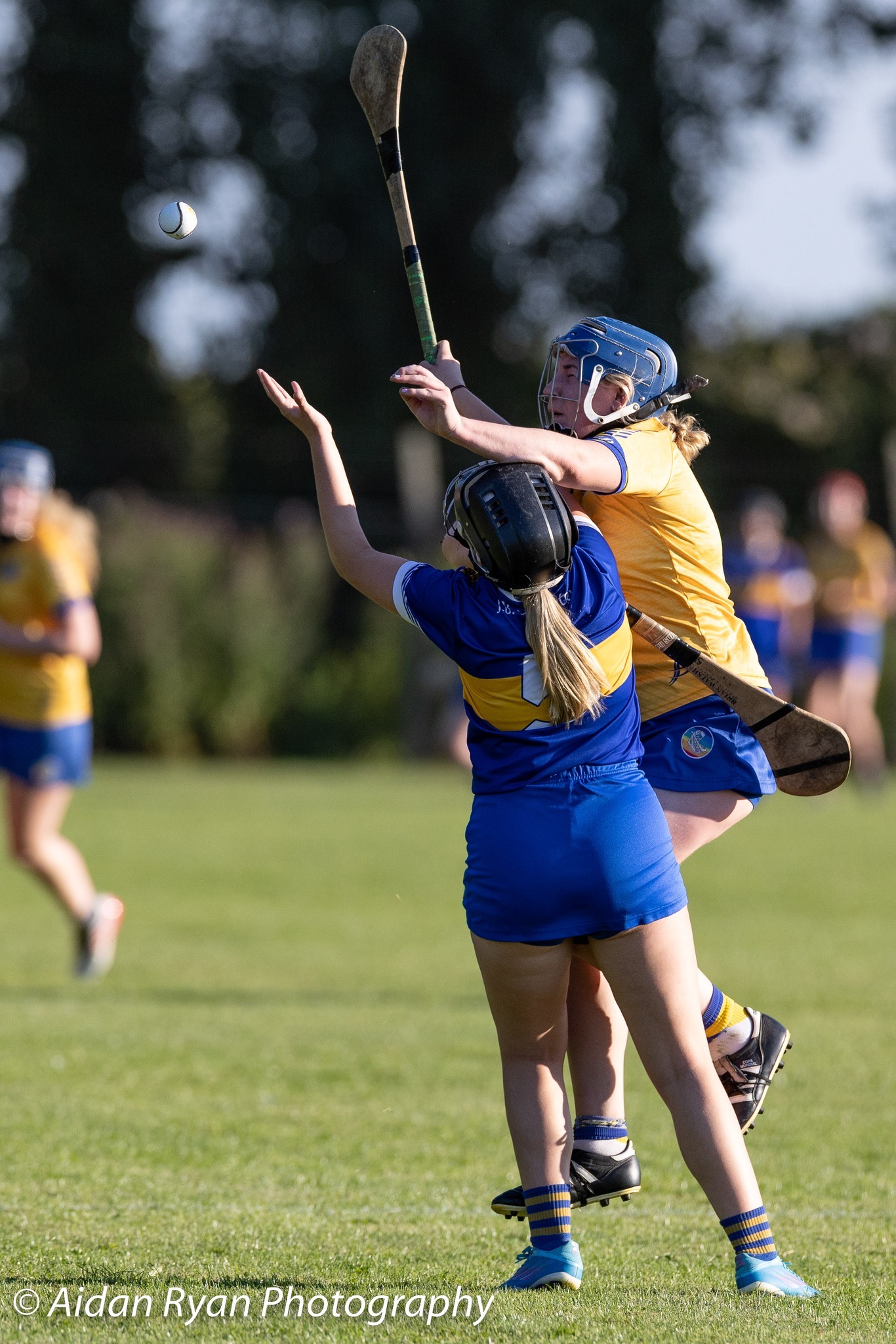 Scariff Ogonnelloe got the defence of the Senior Championship off to a good start on Friday evening when they had a comprehensive win over Kilmaley in Clooney. Under a new management team headed up by Alfie Rogers, Scariff Ogonnelloe set the tone by scoring four unanswered points from play in the first ten minutes, with Kilmaley chalking up their first point from a free won by Niamh O’Dea and converted by Claire McMahon.

Hardworking backs, combined with eager and accurate forwards, resulted in that being Kilmaleys only score of the half; meanwhile all of Scariff/Ogonnelloes forwards, plus one of their midfielders, registered another eleven points, leaving the halftime score at 0-15 to 0-1.
Kilmaley upped their intensity significantly at the start of the 2nd half, scoring 5 points to 2 for Scariff Ogonnelloe with the score standing at 0:17 to 0:6 mid-way through the second half. However, the final quarter saw the momentum switch back to the champions with some accurate interplay leading to two goals, the first from Mairead Scanlan and the second from Lorraine Grady.

While Scariff Ogonnelloe will be happier after this round 1 game, both sides will acknowledge that work remains to be done to ensure goals set for the season, are fulfilled by championship end.

A local derby between Newmarket on Fergus and Sixmilebridge is always going to be hot and spicy but add 30 degree heat into the mix and you get a sizzler!!!

That is exactly what these two teams served up in Shannon Camogie pitch on Friday evening. Full credit to both sets of players who gave their all for their teams in the toughest conditions.

Newmarket were first out of the traps with Laura McMahon pointing twice, one from a placed ball and again from play minutes later.

Then Ann-Marie Hayes added to this tally with a fine point of her own to see Newmarket go three points up with ten minutes on the clock.

Sarah Loughnanes exceptional free taking levelled matters quickly when she slotted over three placed balls in the space of two minutes to see it 0-3 a piece at the first water break.

Niki Kaiser edged the Blues in front with a hard-earned point on the restart before the speedy Aoibhín McNamara sent a rocket of a shot past Newmarket goalkeeper Lauryn Flaherty to put the Bridge in front for the first time.

Newmarket needed a reaction, and they got it when Laura McMahon won a low ball and passed it off to Kaci Toomey who slotted it over the bar.

Ann-Marie Hayes, who seems impossible to stop when she gets inside her player slotted the ball past Sinead Hogan to give Newmarket their first goal and put them back in front by the minimum.  Niki Kaiser added to this on the half hour mark but the ever-reliable Sarah Loughnane was on hand to point another placed ball just on the stroke of half time to see the scoreboard reading 1-6 to 1-5 in favour of Newmarket.

Finia O Brien scored a monster point from distance to level things once again at the start of the second half.

When Newmarket needed someone to come up with the goods, there was Ann-Marie Hayes, ball in hand sending it whizzing to the roof of the net leaving Sinead Hogan no chance between the Sixmilebridge posts. Michelle McMahon followed up with a huge point from out near the sideline and Newmarket seemed to have found their groove.

Kaci Toomey and Laura McMahon exchanged points with Sarah Loughnane in the run up to the second water break, the score board reading 2-9 to 1-8 to Newmarket with fifteen minutes left on the clock.

The last quarter saw Newmarket score 1-3, the goal an absolute bullet from Ellen Casey proving to be the difference as Sixmilebridge tagged on three further points through Finia O’Brien and Sarah Loughnane.

Newmarkets fullback line were very impressive, including Maeve Begley on her Senior debut. While Máire McGrath and Sarah Loughnane really stood out for Sixmilebridge.

Chloe Morey and Muireann Scanlon were without doubt a huge loss to the bridge who can now take full advantage of their bye in the next round, while Newmarket have a quick turnaround meeting Kilmaley next weekend.