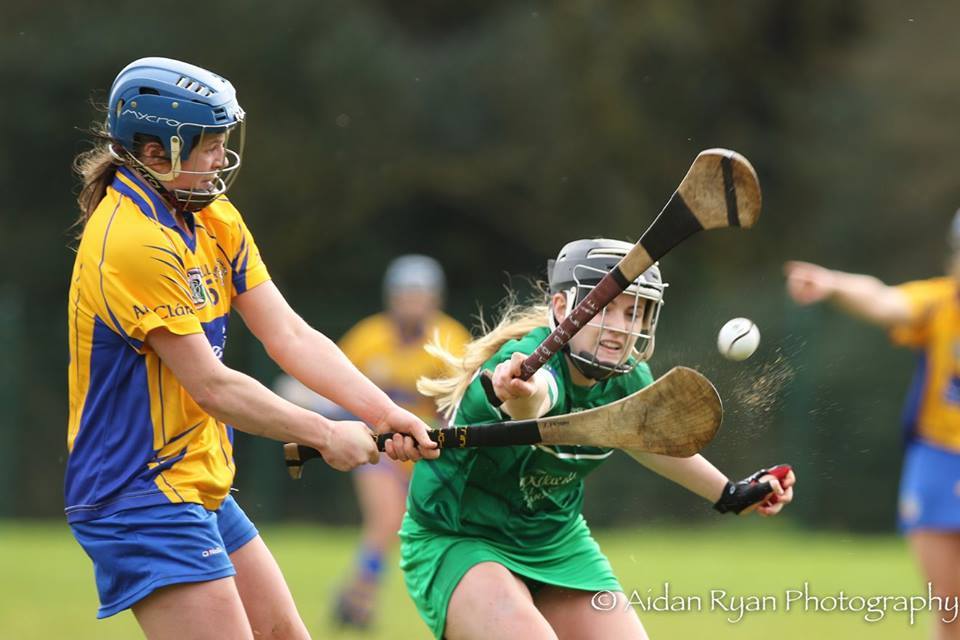 It would prove a truly dramatic finale as Limerick held on for their third successive victory that ensured a place in the National League semi-finals with a game to spare.
With this being practically a winners-takes-all tie for that last four spot, Clare appeared to being heading towards a famous derby victory when recovering from a two point deficit to  lead by the minimum by the 40th minute.

A Niamh Mulcahy penalty flew over the bar to level the tie, but, with an air of resilience, twice more the hosts would inch ahead entering the final quarter.
However, the narrative of this must-win tie would alter within a minute as Rebecca Delee’s perseverance saw the Newcastlewest player raid for a 49th minute kicked goal while in  the next passage of play, Roisin McMahon would be dismissed for a second yellow.

At 1-12 to 1-09, it appeared game over for numerically disadvantaged Clare, but, they managed to dig very deep and thanks to the relentless work-rate of Andrea O’Keeffe along with  Niamh O’Dea, who roamed deep to win crucial possession and frees, a comeback somehow materialised.
Chloe Morey hit three of the next four points to get to within the minimum by the 58th minute. And while the former All Star would be presented with two further opportunities to gain a  valuable point, they certainly weren't easy frees and agonisingly for Clare, both would drift wide of the posts to give Limerick the derby points.

All that after the visitors had reacted positively to a 16th minute Regan Conway goal after great work from O’Dea to fire five successive points, two each from Mulcahy and Mairead  Fitzgerald and take an 0-8 to 1-2 cushion by the 28th minute.
Roisin McMahon did land the last point of the half to lower the interval arrears to just two but there would be better to come from the home side in a rousing second half display.

Mulcahy opened the second period with a 20 metre free, only for Clare to hit four in a row through Morey (2) and the tireless O’Dea and edge 1-7 to 0-9 clear by the 38th minute.
However, their world would be turned on its head with that Limerick goal and subsequent sending off. And while the Banner deserved at least a point, they would be disappointed at the death and now only have pride to play for when facing Offaly in the final round in a fortnight’s time.