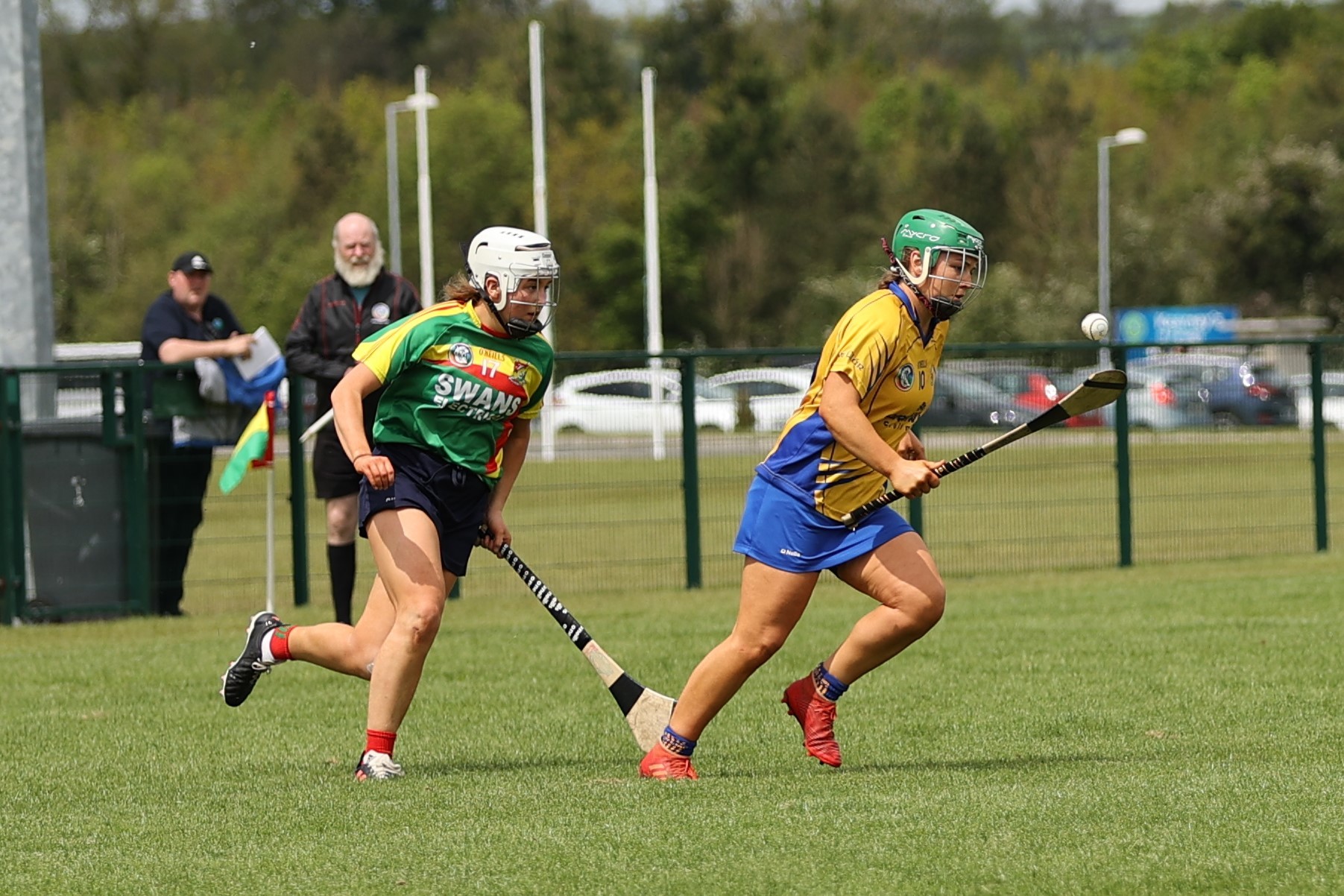 Clares hopes of reaching the penultimate stage of the Littlewoods Ireland Div 3 League semi final were dashed on Saturday afternoon with a last quarter resurgence from hosts Carlow. Up against Intermediate championship side Carlow in their final group game, the Banner side carried the tag of underdog on the long road to Feenagh, but their performance on the field made a lie of the tag as the Banner outfit went toe to toe with their hosts, and for fifty minutes or so had the home side on the back foot.

From the throw in Caoimhe Kelly won a free which she sent long down the field and though Chantelle Kelly gathered, her clearance to the wing fell in the path of Kate O’Gorman who split the posts for the opening score. Carlow were punished for dropping the hurley which afforded Sarah Loughhnane the opportunity to open her tally for the day. Eleanor Treacy opened the home sides tally with six minutes on the clock and three minutes later she levelled the sides. Eve Sinnott and Ciara Quirke both added from play before a superb strike from Sinead O’Keeffe narrowed the deficit to a point. Treacy, who was impeccable from placed ball throughout the game, added three further points, two of those from placed ball to have the home side ahead by four as the first water break approached. From the restart Clare upped the tempo, O’Keeffe winning possession and driving forward, passing to Kate O’Gorman who picked out the unmarked Loughane with the Sixmilebridge woman blasting to the corner of the net. From the puckout Clare again won possession through Niamh Mulqueen who sent play forward. O’Keeffe gathered and sent a short pass to Ciara Halpin who deftly got around Emma Cody and fired past the Carlow net minder for Clares second green flag, putting Clare ahead by two. Treacy converted from placed ball before Clares next foray into the danger area, with Sinead Power driving forward before off-loading an inch perfect pass to Loughnane. Loughnane won a free on the 21 and sent her shot over the bar to give the visitors a two-point cushion as the half time whistle sounded, Clare 2-4 Carlow 0-8.

Treacy, who ended the day with an impressive tally of 1-10, opened the scoring in the second half with a free which Loughnane cancelled out at the other end. Power spilt the posts with her next attempt to put Clare ahead by three. From the puckout Carlow won a free which Treacy sent into the danger area with Ciara Quirke gathering. Quirke who plays her club Camogie with Myshall, who ended Truagh Clonlaras journey in the All Ireland Junior Club Championship semi final in 2012, showed that she still has the accuracy as she landed her first of the day. Kate O’Gorman from an awkward angle out on the wing split the posts for arguably the score of the day. Quirke and Treacy hit two points to narrow the deficit to a single score wand with 46 minutes played Treacy levelled the sides with a free. Clare introduced fresh legs through Niamh O’Gorman, Olivia Phelan and Siobhain Lenihan just before Treacy edged the home side in front, striking on the run. Rachel Sawyer who had been kept quit in the earlier stages burst into life following the second water break, hitting three unanswered points. Niamh O’Gorman pulled a point back to leave three points between the sides. Winning the puckout Clare were straight back into the danger area, Loughnane with eyes locked on the back of the Carlow net was brought down and much to the surprise of both teams instead of a penalty referee Bernard Heaney awarded a free out. Carlow finished strong, a Treacy free though mishit by the Ballinkillen player had the distance and slipped under the bar for Carlows first green flag with two minutes of time remaining. With the game in injury time, Sinnott doubled on a loose ball to raise her sides second green and thus ending the game on a final score of Clare 2-8 Carlow 2-14. 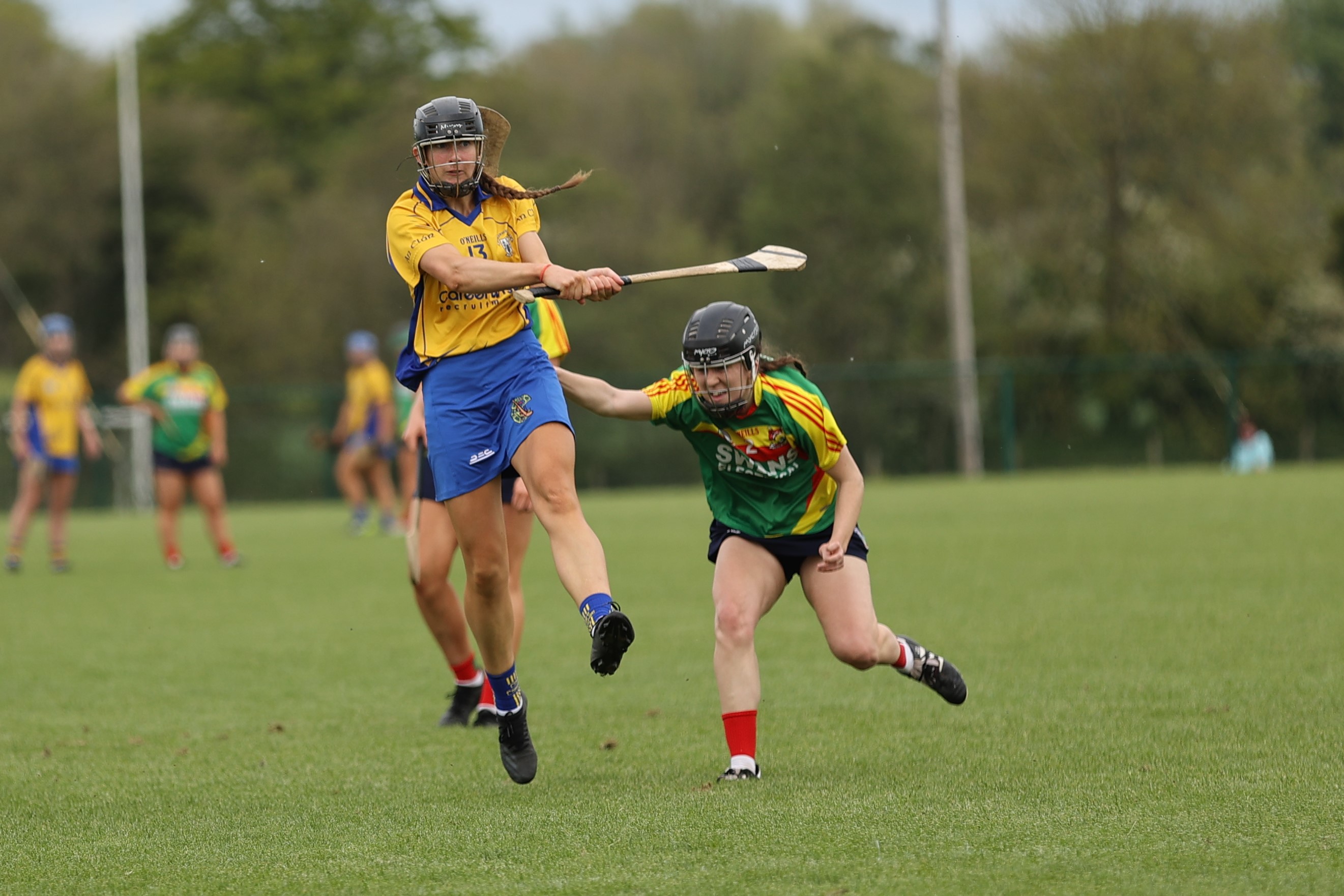 Fixtures for 2020 Under 14 championship finals

Clare take on Dublin this afternoon @ 5pm at St Brendans ...