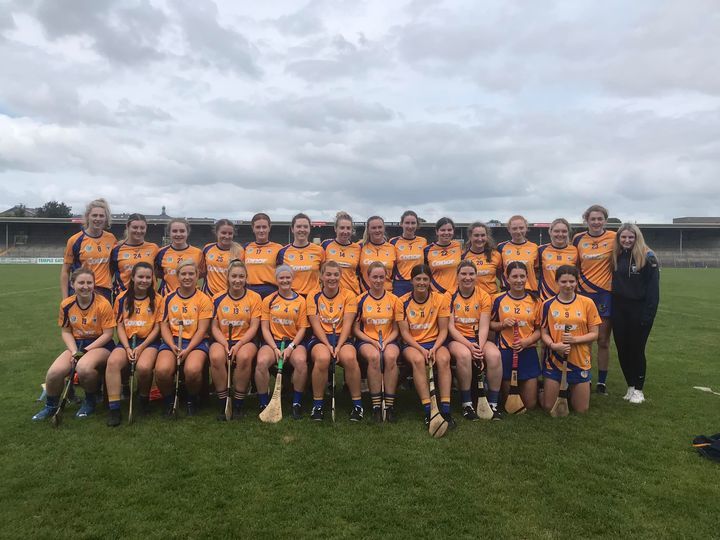 Clare ran out comfortable winners over Waterford in Cusack Park on Saturday afternoon. The opening game in a double header fixture for Clare camogie saw the girls in saffron and blue dominate proceedings at Clare GAA HQ. When these two sides met five weeks ago in the Munster Junior Championship, Clare had a ten point advantage at the final whistle and while the Deise outfit may have travelled to Ennis with the intention on narrowing that margin or better overcoming the Banner, that memo was not forwarded to the Clare outfit who this time round had a twenty three point advantage at the final whistle.

Regan Conway opened the scoring in the second minute with a well struck point from out on the wing. Waterford with the slight wind advantage at their backs in the opening half, sent play forward, only for Roisin Powell to win back possession and send her shot back up the field where Niamh Mulqueen gathered and nipped through the Waterford defence before firing home to the top corner for Clares first green flag. Clare kept the pressure on throughout the opening half and added to their tally while at the other end, the Waterford forwards were not allowed the freedom that the home side enjoyed at the other end as Kate O’Gorman and Sinead O’Keeffe won the aerial battle and thwarted the visitors at each foray into the Clare danger zone. Further points at the town end from Abby Walsh, Mulqueen and a trio of converted frees from Shauna Canny saw Clare go in at the break 1-6 to no score.

Walsh had her name on the scoresheet at the restart, with a brace of points from Canny following. Then Rachel Kelly won possession in the middle, drove forward and passed to Conway who struck hard to the back of the Waterford net for Clares second green flag to effectively put the game out of reach of the Deise outfit. Clare rang the changes from the bench, Labhaoise O’Donnell and Siobhain Lenihan replaced O’Keeffe and the hard-working Aoife Anderson. Grace Carmody added a brace of points before Canny again converted from a free. With forty-five minutes played, Aileen Gallagher accurately landed a free to open the visitor's tally. However, the response from Clare saw them drive forward with Conway raiding for her second and Clares third goal of the game. Ellen Casey entered the fray replacing Carmody, and Finia O’Brien replaced clubmate Olivia Phelan. A Waterford attack in the closing minutes, saw Lilly Magill strike towards goal only to be denied by Lauran Solan who blocked the shot and the resulting ’45 was wide. Niamh Murphy converted a free for Waterfords second score with two minutes of time remaining. Both Clare subs Lenihan and Sarah Loughnane pointed in injury time to see Clare run out comprehensive winners, Next up for Clare is an away trip to table toppers Cavan in two weeks' time, while Waterford will host Tipperary.