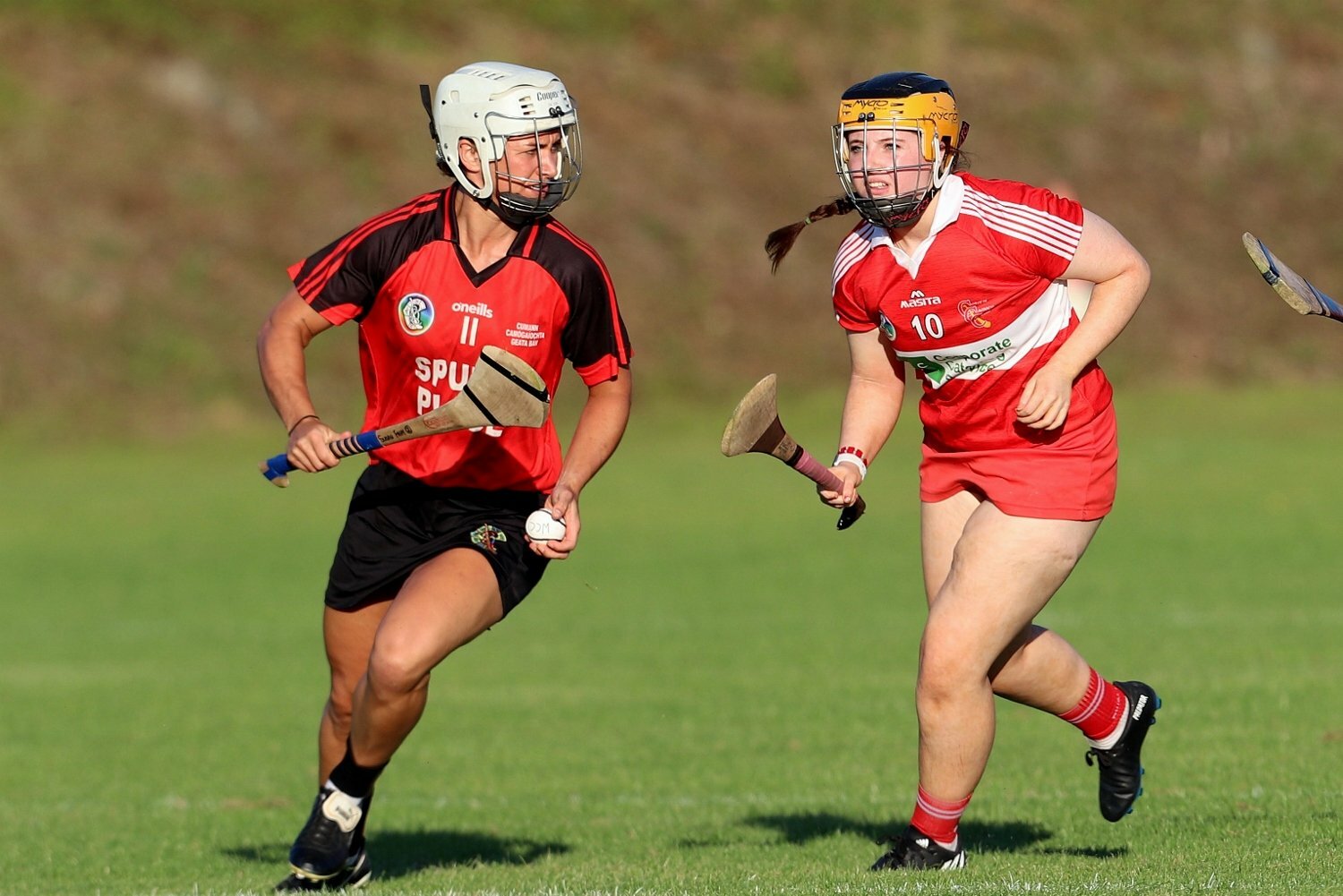 On a beautiful summer evening Corofin took on Whitegate in the opening round of the Intermediate Camogie Championship in Pairc Finne Corofin. This hotly contested battle provided great entertainment for the large crowd in Corofin. Having met twice already this year and more recently in the League final, Corofin having the upper hand in both these games, the Whitegate girls felt they had a score to settle.

It was Whitegate who opened the scoring with a converted 45 from Susan Fahy inside the opening five minutes. Both teams laid down their markers across the field as balls were fought for throughout the field with no side giving an inch. Corofins opening score came when Louise Brown cut the ball into the square from a side-line on the far side of the pitch to find Saoirse Flanagan who caught the ball and rattled the top corner of Whitegate’s net. Whitegate responded with points from Susan Fahy and Aideen Hickey. Corofin replyed with a point from play through Aoibheann Malone. Due to the intense heat of the evening a water break was given and after the first fifteen minutes the score stood at Corofin 1-1 Whitegate 0-2. As play resumed it was Whitegate who hit their purple patch. A quick puck out from goalkeeper Lauren Solan found the waiting Aideen Hickey who went on a solo run and hit an inward shot toward goals only to be batted down by the Corofin’s goalie to the waiting Greta Hickey who grasped the ball and roofed the back of the Corofin net. Corofin replied with an Aoibheann Malone point from play. Whitegate went on the attack once more and a Susan Fahy shot from outside the 21 powered into the top corner to give Whitegate their second goal. Further scores were added by Whitegate through Fahy and Hickey, while Maria Cahill got Corofin’s final score with a well taken point before the break leaving the half time score Whitegate 2-5 Corofin 1-3.

All was still to play for in the second half with only a puck of a ball between the teams.  Whitegate found most of their scores in the second half from 4 pointed frees converted by Susan Fahy. Two other points for Whitegate came from play one each from Susan Fahy and Aideen Hickey. Corofin on the other hand added 1-4 to their scoresheet in the second half.  The 4 points came from play and the goal came from a Corofin free which manager to sail over the head of the Whitegate goalie.  The last 5 minutes of the game were very intense. Corofin on a few occasions following frees, dropped the ball short in front of the Whitegate goals hoping to get a late goal and see this game out.  The strong defence in the Whitegate backs saw off this challenge. Caitriona Apsel, Ciara O’Leary and Triona Kelly showing strong defending skills clearing the ball on numerous occasions. The Whitegate goalkeeper Lauren Solan also ensuring that the ball was well cleared out of the danger zone. Time ran out for the Corofin girls, and it was Whitegate that emerged victorious in the end.  No doubt these teams may meet again later in the championship.

After a very entertaining opener to the Intermediate Championship, it finished Corofin 3-7 Whitegate 3-9.

2021 Junior A champions, Broadford, suffered an agonizing one-point defeat in the opening round of the intermediate championship at the hands of Éire Óg on Saturday evening on a scoreline of 3-09 to 1-14. The Éire Óg pitch was bathed in glorious sunshine and despite the blistering heat, this was a highly entertaining match with a nail-biting finish.

Broadford scored some outstanding long-range points in the first half giving them a deserved 5-point lead at the break. It was the visitors that got matters up and running with a point from play, but Grainne Nolan levelled for Éire Óg from a placed ball within a minute. A Sarah Redmond goal pushed Éire Óg ahead, but a point from play along with three pointed frees in a row from Aoife Dillon put Broadford in the lead by the minimum. Aoife Corey levelled the match with a well taken point. The sides traded points once again before three points in a row courtesy of Annalee Marsh and Beatrice Vaughan seemed to give Broadford the upper hand. It wasn’t to last however, as a good passage of play saw the home side pounce for their second goal, restoring parity and wiping out the lead that Broadford had started to establish. In a fine sequence of play in the last few minutes of the first half, the sliotar found its way from Broadford’s halfback line to Aoife Vaughan located behind Eire Og’s 45-metre line.  Aoife Vaughan struck the ball to send it just short of the goal, and in the square, ready for Aoife Dillon to stretch in and finish the job, raising the green flag for Broadford.  A further Broadford pointed free closed the first half. Halftime score Broadford 1-11 Eire Og 2-3.

The second half was a titanic battle for possession, and it was 7 minutes before a score was registered courtesy of two superb pointed frees from Éire Ógs Grainne Nolan. Broadford pulled back a point, but Aoife Coreys second goal of the evening ate further into the visitors lead. Broadford notched up a further three points from play. Éire Óg defended well and were denied green flags with two great saves from the Éire Óg goalkeeper. The visitors still held a three-point advantage going into the home strait, but with Nolan unerring in her free taking duties all evening, it was the home side that claimed the first points of the championship with a one-point win.

In glorious sunshine last Friday evening in Clarecastle saw a hard-fought contest from start to finish between two evenly matched teams in the opening round of the Intermediate Championship.

Tulla had the perfect start with three points without reply from Aoife Dooley. As the East Clare side continued to dominate and win possession, putting pressure on the Clarecastle/Ballyea full back line resulted with the first goal of the game.

Clarecastle/Ballyea began to settle and with three pointed frees from Emma O’Connell, and two from Doireann Murphy bought them back into the game. On the twenty-minute mark Clarecastle/Ballyea's Hannah Mai Neylon had her first point from play which was soon followed by a goal to put her side ahead. The home side were rewarded a free which was scored by Murphy to leave two points between the sides at half-time Clarecastle/Ballyea 1-5(8) Tulla 1-3(6)

As play resumed Tulla had a great start with a second goal from Sinead McNamara and a further two points from Dooley to put them three points ahead. Clarecastle/Ballyea replied with a pointed free. As the battle continued, Tulla added a point from play from Gillian Ryan. The amalgamation responded with a converted free from Murphy. Tulla had the next two points to keep them ahead. Clarecastle/ Ballyea never gave up, and despite adding the last two points of the game from play from Emma O'Donoghue and Hannah Mai Neylon, it was Tulla that finished the strongest with a two-point win.