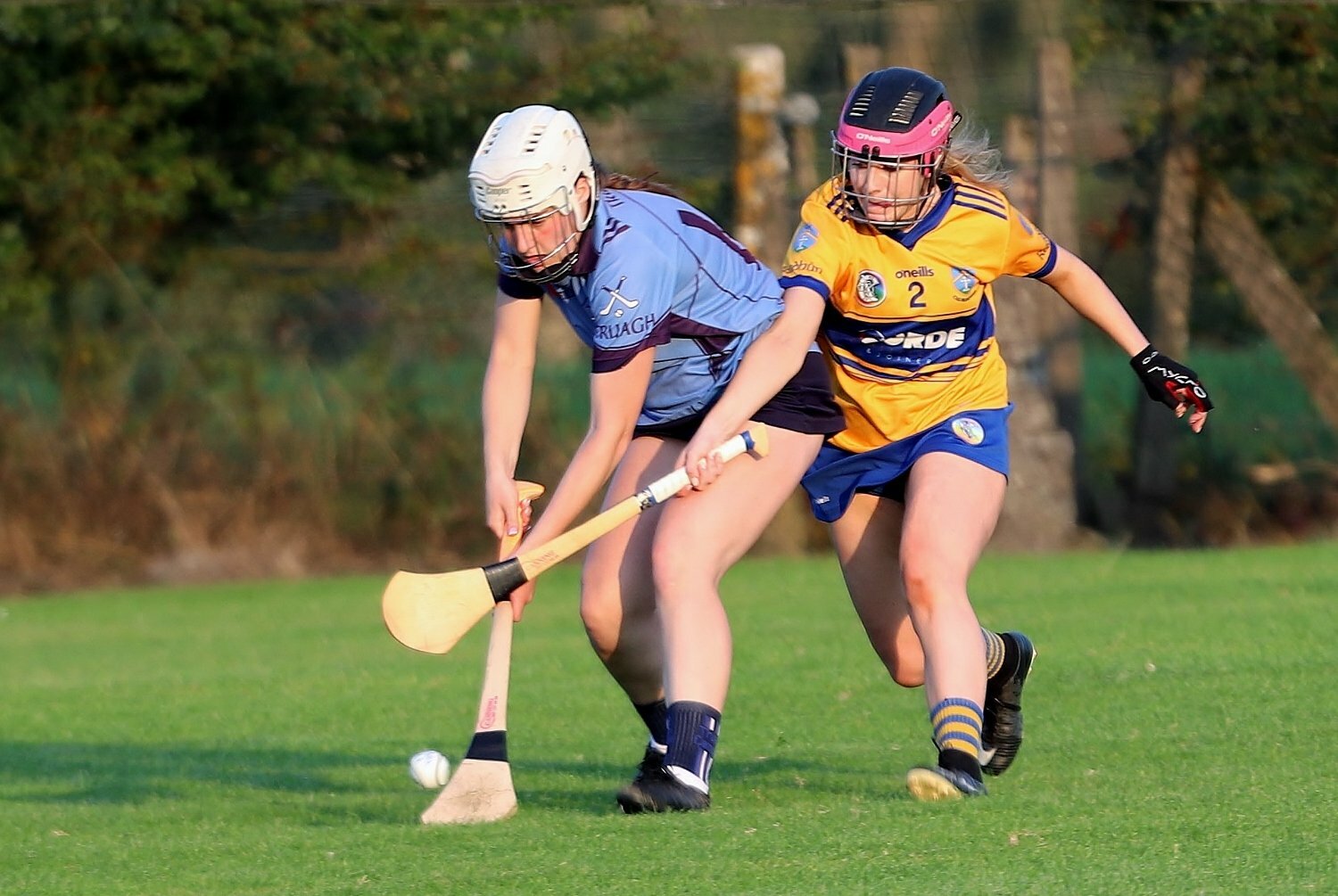 With the mercury still in the high 20’s, the first round of the 2022 Junior Championships started for these two teams in a Ruan pitch bathed in evening sunshine.  Having competed against each other in the Division 4 non-County player League final only four weeks before, both teams had a point to prove and Truagh Clonlara were looking for revenge.  That match had been 13-a-side and this too for was also a 13-a-side affair.

Top scorer on the day, Aoife Anderson, lifted the white flag in the first minute for the home team but this was cancelled out four minutes later as a point from play, followed quickly by a foul from Ruan, duly converted, gave Truagh Clonlara a head start.  That was to be the only lead in the game for the visitors.  Points from Lauren O’Donghue and Eve O’Connor, sandwiching a goal from Kate Forde, had the home side into the lead, and one they never surrendered.

Getting ahead on the board is one thing but staying there is quite another and Truagh Clonlara are too good a side to drop their heads.  Strong defending from the full back line of Roisin O’Loughlin and Hannah King, supported by the half back trio Aimee McDonagh, Rebecca Crowe and Sinead Hastings kept the visitors closed out.  Feeding the sliotar into the centre field combination of Neasa Ní Lachtnáin and Aisling Moloney, they combined seamlessly and distributed the ball to runners looking hungry for work and the Ruan management will be pleased that the first half tally of 1-12 came from five different scorers.

Welcome water breaks in both halves provided a chance for both teams to pause, take on liquids and refresh.  The stoppage did not change the momentum though, and Ruan continued to keep the board active with six points in the second quarter.  However, every score is vital, and the travelling team halted the local advance by raising the green flag twice to close the gap and pull Ruan back to a five-point lead at half time.

Play resumed in the second half as Ruan injected some pace with the introduction of Amy O’Donoghue to the attack and the gap remained at five points to the home team as the third quarter came to a close.  An injury to Hannah King forced some on field switches by the blue and gold, but they were well prepared for this.  The addition of Natasha Hynes kept the Ruan attack lively, and with the game now into the last quarter, Noel Quin was forced to stop play for an injury to Lauren Slater. As the sun dropped down, two more points from Eve O’Connor and Aoife Anderson and an inspired goal from Louise McDonnell closed out the game.

Whilst silverware is not on offer for a first-round clash, Ruan will be very satisfied with all the points and a confidence boosting result ahead of their next outing.

Inagh Kilnamona forwards were in impressive form whilst their backs put in a solid performance.  Twins Patricia and Sarah Coote impressed in midfield and forwards for the home side along with young up and coming player Elisha Rynne. Caoimhe Longe and Caoimhe Devitt were solid in defence.  Whilst newcomers Eva O'Halloran was not fazed by her first appearance in goal at adult level.

On a very hot and humid Saturday evening Kilkishen-Bodyke travelled to Parteen for their first-round game of the Junior B championship, where the home side emerged winners on a final score of Parteen 3-14 Kilkishen/Bodyke 3-5.

Banner Camogie started their Junior C Championship with a trip to near neighbours Clarecastle/Ballyea, where the home team won on a scoreline of 2-11 to 1-6.

The match was played in brilliant sunshine in Clarecastle pitch, with the first half being a very evenly matched affair, with each team’s scores being quickly cancelled out by a score from the other side. At half time, the sides were level at 1-4 apiece. The Banner goal was scored by Leah Vaughan, after a pass from Elena Sanz, who had a brilliant solo run from the halfback line. The points were added by Sanz (penalty), Ciara Meehan (2 frees) and Caoimhe Ryan.

The second half was a different affair, with Clarecastle/Ballyea outscoring the Banner by 1-7 to 0-2. The Banner girls continued to fight to the end, but a combination of missed chances, inaccuracies and crossbars meant the home team had the game almost won by the second waterbreak, leaving the final score Clarecastle/Ballyea 2-11 Banner 1-6.