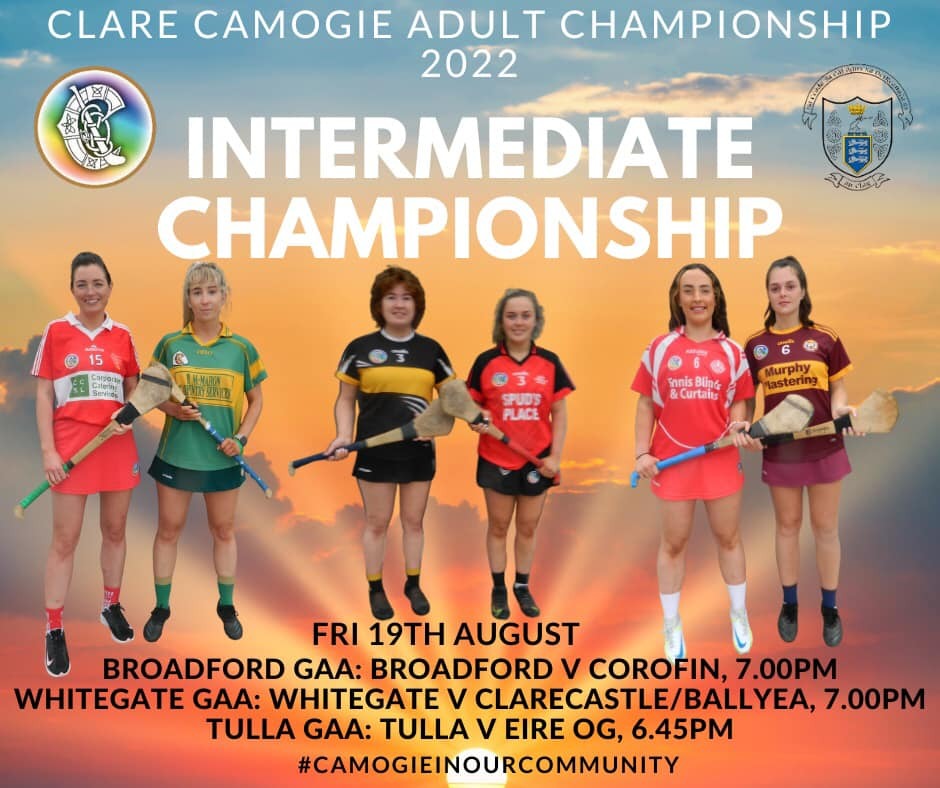 Round two of the Intermediate Championship saw Corofin travel to face Broadford. This was the first championship meeting of these two sides since Corofin pipped Broadford to claim the 2020 Junior A title, a crown which Broadford secured last year. Having suffered narrow defeats in their opening rounds both sides were keen to get points on the board. The opening half of the game was a low scoring affair however, there were fine displays as both sides got stuck into this physical encounter. It was Corofin who were first on the score board when Aoibheann Malone picked up the ball on the 21-yard line and burst through to find the net. Broadford were quick to respond in the tenth minute Anna-Lee Marsh struck the ball over the Corofin bar. Broadford continued to apply the pressure and were rewarded when a dropping ball was caught by Aoife Dillion who made no mistake in hitting the Corofin net. Broadford continued to go on the attack and got their final score of the half once again from Dillion who stuck the ball over the bar from a ‘45. Saoirse Flanagan added to Corofin’s scoring tally up front with a point from play while Aoibheann Malone added a point from a ‘45 just before the break leaving the score tied up at 1-2 apiece.

A tied game left everything to play for in the second half and Corofin began the brighter of the two sides. Aoibheann Malone added a point from a free in the second half and this was followed by a point from sub-Lizzy Roche in the forty fourth minute. As Corofin continued to attack, a long ball in towards the square found Saoirse Flanagan who stuck the ball past the Broadford keeper. However, Aoife Dillion kept the home side in touch with a point from play and another point from a placed ball. Aoibheann Malone added another point for Corofin while at the other end of the pitch Dillion added to the scoreboard for Broadford. Corofin added further to their tally as Malone scored her fourth point of the day from another placed ball while Saoirse Flanagan added two additional points from play ensuring the visitors came away with the win in a tightly contested game. Final score Corofin 2-8 Broadford 1-5.

Weather conditions were damp and overcast but this didn’t hinder the play in the Whitegate camp, who gave a great display of skill and determination. It was Whitegate who were first out of the traps when Susan Fahy on the run scored a point and got the opening score of the evening.  Whitegate were the more dominant throughout this match and had notched up a score line of 1-4 before Clarecastle/Ballyea got their first score, which came from the stick of Doireann Murphy after fourteen minutes of play.  Aideen Hickey scored Whitegates second point when sister Greta laid off a lovely ball to her.  Moments later Greta Hickey added a point of her own when a free by Susan Fahy dropped short into the waiting hands of Hickey who tapped it over the bar. Susan Fahy added another point from play and moments later following a foul on Aine McDermott Fahy stepped up to take the free, but she drove it with power which whizzed past the Clarecastle/Ballyea goalie to raise the first green flag of the day. What followed shortly was another goal when Whitegate’s Aine McDermott also found the back of the net. Whitegate continued to capitalise on their lead and at half time had a healthy tally of 3-06 while Clarecastle/Ballyea managed to score 0-03.  McDermott went on and added another goal as well as a point from Greta Hickey and another converted free from Fahy.  Clarecastle/Ballyea did have a goal chance in the first half but quick reflexes from Lauren Solan denied them of this opportunity.

The second half continued in the same manner as the first with Clarecastle/Ballyea were only able to match what they had scored in the first half which was another three points to their final score.  Whitegate on the other hand scored 10 points in the second half. Sharpshooter Greta Hickey scored five of these from play, Susan Fahy added a further three points and a point each came from Aisling Treacy and Aideen Hickey.

Dr. Daly Park was the venue as Éire Óg made the short journey to take on Tulla in round 2 of the Intermediate championship on Friday evening. Both teams were determined to add to their winning tally from round 1, resulting in a tight, hard fought and though low scoring, thoroughly entertaining match. Played in the shadow of Tullas’ impressive new stand, the outcome hung in the balance right up to Andy McMahons final whistle with the visitors holding out for a three-point win on a scoreline of 1-8 to 1-5.

Éire Óg were first on the scoreboard with a brace of points from Grainne Nolan, one from a placed ball and the second, a well struck long distance effort. All to be wiped out as Tulla struck for goal within seconds. A second free from Nolan restored parity followed by a super point from Éire Óg stalwart, Sarah Redmond. Two in a row from Tulla followed by Nolans third pointed free left matters all square at the break – Tulla 1-2 Éire Óg 0-5

Sarah Redmonds second point of the evening gave the Townies a brief lead before play moved up the field from the puck out. Tulla orchestrated a fine attack and were unlucky to see their shot on goal put out for a ’45 which was duly converted to level matters once again. Grainne Nolans fourth free pushed the visitors ahead. Tullas Lorraine O’Loughlin saved two shots on goal before Leah Ryan eventually broke through and sent a kicked shot to the back of the Tulla net to give her side a four-point lead. Two Tulla points halved the lead before Jodie Russell scored the security point to restore the lead to three. The home side threatened throughout the following three minutes of injury time, but Éire Óg defended well and held out to secure the win.